Paul's work with the Beatles, Wings and as a solo performer has now produced worldwide sales well in excess of 100 million singles... 'Hope Of Deliverance', a UK Top 20 hit in January '93, was also a wow in the clubs thanks to an extended dance remix version 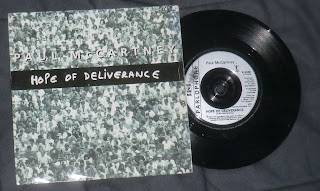 I can't vouch for how much club play that remix actually got, but here it is anyway. It's quite interesting but doesn't have a lot to do with the original song so its promotional value may have been somewhat limited. Still, Paul McCartney probably liked them, as he's always liked to drift into surprising directions alongside the more mainstream material.

To say that 'Hope Of Deliverance' is a typical mainstream McCartney recording is not, in my mind, to damn it, though it does include a lot of the things that I know people who don't like McCartney dislike: the hummable upward melody, the slightly predictable sequence and the hopeful but unspecific lyric. It's a record he could have made as easily in 1973 or 2013 though the production (engineering more than arrangement) places it roughly in this era. It's likeable but ultimately insubstantial and I've never bothered buying the parent album Off The Ground though I did pick up the 7" single for the vegetarian anthem 'Long Leather Coat' on the flipside. It makes a nice round ending to Now 24 at least.