I have to admit I've not been giving as much time to this album as I'd expected. Partly that's for practical reasons but also I find that the music isn't catching my attention so much - South Africans seem to have been subjected to the very blandest music Britain had to offer in the early 1990s. OMD were, by now, past the inventive stage they seem now to be trying to revive, and were now a just a vehicle for Andy McCluskey to release the sort of yuppie pop he'd later try to sell on to other acts. Unfortunately, in keeping with the times even the potentially interesting parts of the track (the unusual rhythm, the slightly nautical countermelody) are buried in the production to avoid waking up the listener.

Possibly the most interesting thing I can say is that the word "on" from the song title seems not to have made it to SA.

UB40 and Robert Palmer 'I'll Be Your Baby Tonight'

It's not something I'd normally draw attention to, of course, but in the context of a South African CD it's hard not to notice that there's something different about UB40 from the acts we've encountered so far. That's right, they're from Birmingham. No seriously, even here there was a time when having black and white people in the same band was a controversial statement. But of course, UB40 have always been hugely popular in Africa so in the democratising early 1990s it's not surprising to see them here and even taking top billing whilstover here this was a Robert Palmer single with UB40 only guest performers. It comes from a Palmer album and he appears alone on the UK artwork, as well as taking the lead vocal (it sounds like at least some of the harmonies are him too, actually).

The song is of course a cover (yes, UB40 in cover version shocker!) of a track from Bob Dylan's John Wesley Harding album, the first he'd released since his infamous motorcycle accident. Atypical of Dylan's work at this time, it's a light-hearted romantic song and the original version has a relaxed mood in keeping with the lyric. Neither Palmer nor UB40 ever really did that sort of calm easy-going music though, and the scrupulously tidy production undermines the effect rather.

Available on: The Essential Selection

Another act who might not have been that keen to have his music released in South Africa before this point. And yes, if this looks odd to you it's because the record was originally credited to the (confusing) band name Jesus Loves You in the UK and Europe; though since George appears in the video (he doesn't look like he's all there, I know) it's hardly anonymous.

If the record sounds odd to you, that's because it is. Aside from the vaguely electronic bit at the end, it sounds like the sort of thing an enterprising producer would have got some session musicians to record as a cash-in on the success of 'My Sweet Lord' - it sounds like  it was written by somebody who'd read an article about Hinduism several years earlier and was slightly hazy on certain details, although in reality George had apparently been dabbling in the religion at this point. And yet he still found himself singing "If you do not take a vow/You can eat the sacred cow/You'll get karma anyhow." I can't really imagine what they made of all this in South Africa but apparently it made enough of an impression to get on here.

Available on: At Worst...The Best Of Boy George And Culture Club

After three UK chart-toppers, it was probably about time we got a song that wasn't a big hit here, though I for one wasn't expecting to be by a Welshman. This was the second British single from the second album by Karl Wallinger's post-Waterboys project and the follow-up to the big radio hit 'Message In The Box', though in the US this one came out first and performed better, topping the (airplay-based) Modern Rock Tracks chart for five weeks.

People don't seem to talk much about the Caring Nineties now, but it was the buzz phrase around the turn of the decade and some of the music recorded early on seemed to be reflecting that sort of mood. Accordingly the Goodbye Jumbo album is supposed to trace a protagonist's journey toward spiritual fulfillment, though this particular track is early in the sequence and so our man is fearful in the lyric, though the music is more rousing in tone as he seeks some sort of enlightenment. You can imagine this going down well at the time, though British people were never that keen to actually buy World Party singles and stayed away in their droves. Out of context it doesn't wholly convince now, though I will at least trust that the quote from 'Sympathy For The Devil' near the end is in a spirit of homage rather than plagiarism.

Three tracks in and this is the first one not to have appeared on a UK Now (well, not in the main series anyway, it's on several spin-off releases like the recent Now That's What I Call 30 Years

) so this is my only opportunity to write about it in this form.
It's tempting to make the obvious comment about a white rapper appearing on a South African album but of course the first few rap singles to top the UK chart were disproportionately Caucasian as well: Partners In Kryme, Vanilla Ice, The Simpsons (stretching a point a bit maybe?). I admit I'm pretty ill-informed as to the arrival of rap music in the mainstream in South Africa but I'd imagine it was not dissimilar to here; I do know that rap music caught on in the black townships but I don't suppose that would have translated to sales.

Robert Van Winkle always cut a rather ridiculous figure, and not only because of his ethnicity and posh background. He's not totally incompetent as a rapper but even in a profession where modesty isn't considered an advantage he seemed immensely fond of himself. It's perfectly standard to rap about how good you are at rapping of course but he doesn't match up to the wit or spontaneity of the great freestylers, and his attempts to adopt street slang are just cringe-inducing. And it's not welcome when he drifts into recounting a shooting in the middle of the song, especially as his story mainly seems to be about running away. That said, there's something to be said for rendering the music accessible to a wider audience and the production of the track's not bad. Of course, it's the second track in a row to have been involved in a lawsuit with Queen (and David Bowie) understandably wanting a cut of the royalties for the 'Under Pressure' bassline. It's tempting to sneer and not totally wrong to do so, but I have to admit there's a reason this was successful, and a reason he's never matched the success.

Available on: To The Extreme

Yes, 'Sadeness'. That's the title under which it was released pretty much everywhere except the UK, where the label presumably feared that we'd think it was a spelling mistake. The title, of course, refers to the Marquis De Sade who's addressed in his native French at various points in the track. The combination of heavy breathing and hits of sexual debauchery with religious imagery (the sampled Gregorian chant) was obviously something with appeal to the more pretentious but I found it more annoying than anything else (even though I was about the right age then, 12). And it's laid over music that could be described as "new age", also not a selling point in my book. I think the most enjoyment I've ever got out of it was trying to work out what the French lyrics were. In truth, the vocals work more as a texture than as a text and that's presumably part of the reason the song could become such a global hit.

Available on: The Platinum Collection

Yes, we're more than a week into the months already and I haven't started an album yet. It doesn't leave a lot of time for a double album so as a quick diversion I'm going to make a one-off excursion into the overseas Now albums. 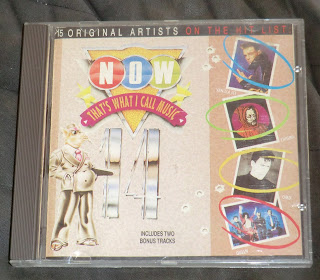 I happened across this South African Now 14 in a charity shop in Pinner a couple of weeks ago. At least, I eventually concluded it was South African from the "made in RSA" legend on the CD. Discographical info is pretty scant online, but I did succeed in finding that a Now 14 was released there in 1991, which would tally with the release date of the songs featured here. Sleeve notes for the album are literally non-existent (the inner pages of the booklet are blank) so I can't tell you which are the two bonus tracks. Nor have I been able to find any South African charts for this period; there seems to be no tradition of a singles sales chart in the country, only airplay charts in any case.

At least we have the songs, and it's tempting to quip that nothing changes anywhere in the world, with a Now album from another continent still opening with a Queen track. Ironically, 'Innuendo' is one of the few Queen inclusions that doesn't open a UK Now or even a side of one - it's the very last track on our Now 19. Of course, Queen appearing on a South African album immediately prompts thoughts of the controversy about them playing Sun City in the previous decade; but by 1991 they were effectively incapable of performing anywhere and of course by the end of the year Freddie Mercury was dead. Though he wasn't open about his illness at the time, it's easy to find hints of it in hindsight; the title track of the last album the group released in his lifetime is grandiose even by Queen standards, a clear attempt to do another 'Bohemian Rhapsody'. In fact 'Innuendo' is slightly longer than their signature hit, composed from multiple sections with all four band members having contributed to the writing. There's even a star guest: Steve Howe from Yes on guitar in the middle section. Inevitably, the effect is contrived and Roger Taylor's typically platitudinous lyrics do little to help, even as they nod to the mood of the early 1990s by bemoaning political division. Mercury's vocal power is sadly already diminished and the song falls between two stools: too overcomplicated to work on it's own terms but not overblown enough to be proper Queen.

Labels: Brian May, Freddie Mercury, Now 14 (South African), Queen
Newer Posts Older Posts Home
Subscribe to: Posts (Atom)
An entirely unofficial track-by-track examination of highlights and lowlights from the Now That's What I Call Music compilations. And if that doesn't sound like a challenge, you're obviously not an old curmudgeon like me.