Amen! UK are Panos Liassi, Luvain Maximaba and Candy Girl Pauls Masterson... 'Passion' was a major floor filler in the clubs and then crossed over to make the national Top 15 in early February '97.

The illustration of the single cover shows the "UK" part of the name hidden away in the exclamation mark, which does rather suggest they were forced to add it, presumably due to legal action from the US rock act Amen. And when the starting point of a post is typography, you can probably guess how excited I am about the song.

I've had to listen to 'Passion' several times to try and form any memory of it at all, and I'm still struggling: it's an utterly generic commercial dance track whereon an uncredited female singer informs us about some passion which is not only running through her brain, but also driving her insane. It's nice of her to let us know but I don't especially care. This is precisely the sort of thing that put me off dance music: there's no energy, no surprises in the rhythms or melodies, just three minutes of boredom.

It all makes for a dull ending for what had been a relatively interesting album. Burying a lot of samey dance tracks at the end wasn't a great move.


Due for release on 17th March '97, 'Flash' is the storming follow-up to the huge British and European anthem 'Seven Days And One Week'.

They mean British in the sense that it was popular in Britain, of course, since B.B.E. were Italian and French. And yes, "British and European" is a bit of a tautology, but we all knew what they meant. There's something quite mid-late 1990s about a dance act from mainland Europe scoring consecutive Top 5 singles (and in this case, two more Top 20s thereafter) with obviously club-oriented material: no cover versions or big name guest stars here.

'Flash' is another totally instrumental track, though a more eventful one than DJ Quicksilver's attempt. Some of the percussive sounds on it remind me a bit of 'Gunman' by 187 Lockdown. It's not quite the sort of think I'd listen to out of choice still, but it has less of the sense of going round in circles than most big trance hits.

'Bellisssima' is the European club anthem that looks set to invade the the Uk chart sometime around 31st March '97... You have been warned!

I realise it's pretty standard practice to refer to any dance record as a "club anthem" but it rarely seems truer than this. 'Bellissima' is one of those tracks that are so functional it almost feels unfair to try and form an opinion on them out of the intended context, but then again this is exactly the sort of challenge I was trying to set myself when I started this. It's an entirely instrumental track that starts with a standard progression and builds in an odd whistling note every so often to give the track structure. Not really for me, I must admit.

Sash!'s Faithless-inspired smash 'Encore Une Fois' flew into the chart at No.2 on 23rd February '97... It is one of the fastest-selling dance tunes of recent times selling around 200,000 copies in just 2 weeks.

Few would have guessed at the time, but Sash! were embarking on a record-breaking career: this was the first of three hits to peak in the runner-up position in 1997 alone, and they ended up with five number 2s, more than any other act who never managed a Number One. And by the way, I did say "they" - although Sascha Lappessen is the public face of the act, they are in fact a trio; I presume the other two DJS shown in this video are the other two members of the groups, but it's hard to tell as they're rarely seen publicly. As usual, they worked with various guest vocalists, sometimes credited, sometimes not: this one is fronted by their fellow German Sabine Ohmes, who capitalised on this success by adopting the stage name Encore! and singing only in French hereafter, most famously on her hit 'Le Disc Jockey' (see what she did there?), which is even more similar to the original of this track than to the British hit version.
I do recall hearing this for the first time on the chart rundown and being totally unable to grasp the appeal of it to anyone. Although it was hardly the first record in this style to become a hit (hence the sleevenote reference to Faithless), it still remained utterly beyond my ken. This wasn't even the "serious" dance I was reading about in the NME, to my ears just a lot of humming noises with somebody speaking French over it. Over the years, Lappeson became a more endearing presence on the pop scene and I can get into "imagining why people might like it" territory with this one now, but it's not a favourite of mine still.
Also appearing on: Now 37 [with Rodrigues], 38 [with LaTrec], 39, 41 [with Shannon], 42, 45, 71 [with Stunt]
Available on: Ministry Of Sound: The Rush 2010

The Source Featuring Candi Staton 'You Got The Love'


John Truelove's club anthem was originally a Top 5 smash in 1991... New mixes saw the powerful cut, which features the timeless vocals of Candi Staton, return to the chart at No. 3 in February '97.

In fact, Candi Staton's original gospel single crept into the Top 100 just before Christmas 1986, but it's fair to say that more people are familiar with Truelove's dance reworking, originally a bootleg that later went legit. And if they missed it the first time around, they'll probably have caught up with the seemingly endless stream of revivals since: this is the highest-charting version to use Staton's vocal, although of course 'You Got The Dirtee Love' outdid this by one place in 2010.

The main result of all this is that my ears are quite fatigued of this song. It's been just about long enough since the last remix that I can stand to hear this now, but I still find it hard to give it the sort of close listen that would reveal why people might prefer this mix (by Rhythm Masters, says the sleeve note here) over any other. Indeed it's hard to escape the suspicion that they didn't and it was just an excuse to milk a few more bob out of a one-hit wonder.


Released on 3rd March '97, 'Shout' looks certain to become Ant McPartlin and Dec(lan) Donnelly's 12th Top 20 hit in barely 3 years... They have been described as a cross between Reeves & Mortimer and Zig & Zag (!) 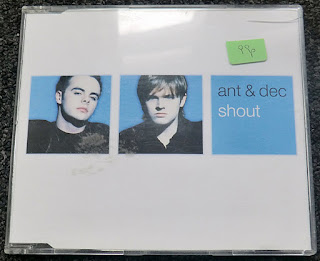 If you're a regular reader of this blog, you might be faintly surprised to learn that the only two song from it I have a physical single of are this and 'Beetlebum'. I was slightly surprised there weren't more of them myself, really. But as for my possession of this single at all, well, that's nothing anomalous. You can probably see in the image that I didn't pay full price and my purchase of the single itself was mainly out of curiosity about Steve Lamacq's remix on the B-side. I already knew the song from the album though because my brother had it; both of us had rather a soft spot for Ant & Dec. As dabbling actors, they always seemed to be having more fun being pop stars than most, distancing themselves from the other boy bands who insisted they were serious RnB groups.

By the time the duo had reverted to their own names they'd embraced Britpop more than any of their peers , presumably because this was nearer their own taste than the watered-down swingbeat of their earlier hits. 'Shout' goes a bit further by adding a bassline after the fashion of 'Walk On The Wild Side' and stinging fuzz guitar as well as the slightly odd lyric which the boys themselves presumably had a hand in. It's a slightly odd mix but an enjoyable pop record. It's just a pity that they followed up with the dull ballad 'Falling' and then retired from pop, if we forget the England 2002 single. Which we probably should.

Alisha's Attic are sisters Karen and Shelley... They came from Essex to conquer the world and have done alright so far - Indestructible' is their 3rd hit in less than a year and has followed 'I Am I Feel' & Alisha Rules The World' into the top 20.

Brian Poole's daughters were nothing if not consistent chart performers at the end of the last century: this was the second of three consecutive hits to peak at 12, and the singles either side of it peaked at 13 and 14. It's faintly surprising that they're so little represented in the Now! series, although having a lot of hits close together can be a problem in that way. The greater problem is that they're represented here by a rather middling song, which sort of floats by without making much impression on the listener, rather than one of several stronger singles with more attitude or melody that could have been here. Maybe it's a female thing. Like Cathy Dennis (remember my last-but-one post all those months ago?) both Poole sisters moved into songwriting once their stardom as performers was over. Shelly [as she now spells it] seems to have become the more successful in terms of actual hits. Also appearing on:Now 41 Available on: Alisha Rules The World

The Divine Comedy 'Everybody Knows (Except You)'


Due for release on 10th March 1997, 'Everybody Knows' finds mainman Neil Hannon in real romantic mood this time around... It is tipped to give them their biggest hit to date.

In the end, it didn't quite make it - this matched the peak of breakthrough hit 'Something For The Weekend' but spent one less week in the Top 75. Perhaps I should take the blame as I bought none of the three CD single formats available: it seemed unnecessary when I'd got the album for my birthday two days earlier: it seems to have been a matter of policy for the Divine Comedy to release albums before singles. Apparently you were supposed to buy all three (card-sleeved) CD singles and fit them into the large box around the album CD, but I didn't realise that at the time, and probably wouldn't have bothered anyway.

I did like the song though. Like most people, I'd only become aware of Neil Hannon and his work the previous year, although I had read a review about him in the NME before Chris Evans started playing him so I'm almost cool. Anyway, this seemed like a refinement of the template of his previous album, aided by the fact that he could now afford to record the whole orchestra at the same time: the album was officially recorded at soundchecks at the Shepherd's Bush Empire, although probably with a little touching-up in a studio afterwards. It lends the production a certain lightness of touch that prevents Hannon's ironic lyric from being too irritating. Mind you, even at the most jokey (his dramatic delivery of the line "I made a small boy cry") there's always some sort of sense that the desperation is real - within the scope of the performance, at least, not necessarily in Hannon's own personal life - that saves this from sounding like a joke at the listener's expense.

Also appearing on: Now 42
Available on: A Secret History? The Best Of The Divine Comedy

Labels: Now 36, The Divine Comedy
Newer Posts Older Posts Home
Subscribe to: Posts (Atom)
An entirely unofficial track-by-track examination of highlights and lowlights from the Now That's What I Call Music compilations. And if that doesn't sound like a challenge, you're obviously not an old curmudgeon like me.