Turin Brakes are the duo Olly Knights and Gale Paridjanian... Their first record was The Door EP in 1999, their first album the highly acclaimed The Optimist and this track, 'Pain Killer' became their biggest hit single to date when it stormed the Top 5 in February 2003.

The exact title of the duo's only Top 20 single seems to vary depending on where you look - 'Pain Killer' seems to be the official spelling but even the record company's official YouTube upload has it as one word. Some copies of the single also bear the subtitle 'Summer Rain'. There again, some insist that the debut album is properly called The Optimist LP, even on CD. I'd bought that album not long after it was released in 2001 and it was quite exciting to see them seeming to grow an audience. It certainly seemed that their second album was treated as a high priority by the record company, who heard potential hits in its slick production by Tony Hoffer (recorded in Los Angeles), and in a conscious attempt to break the band this single was released as a "limited edition" CD single for the bargain price of 99p, a ploy that was fashionable at the time but unimaginable now. 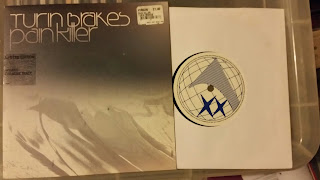 Equally strange in retrospect is that I was surprised to pay more for the vinyl than the CD, but of course I had to have both for the exclusive demo track on the 7" - indeed back in 2001 I'd spent 99p on the 7" of 'Underdog' at the same time as I bought both the CD singles, and there wasn't even a unique track on there. A couple of weeks later we went into London to buy Ether Song and get it signed, although I managed to make do with only one copy of that (the version with the bonus CD, naturally). As it turned out the album was re-issued at least a couple of times with more additional tracks and even a totally new single '5 Mile (These Are The Days)', such was EMI's ambition at the time.

It didn't quite work out that way in the end and as far as many radio listeners would know this might as well be the only record Turin Brakes ever made. Depending on exactly which radio station they listen to, they may be hearing either the standard radio edit (as featured here) or the "clean radio edit" which removes alternate lines from the second verse: "My love/ [Giving me head]/ Feeling very guilty/ [Breaking the bread]". Neither of these is quite the same as the slightly longer version you'll find on whichever edition of the album you pick up. Pick one up you should because whilst I could fill this post with Turin Brakes songs I like more than this one (including the singles either side of it, in fact) this is nothing less than a fine pop single with the slightly toppy sound of Hoffer's production the only element I'm willing to criticise. Mind you, even that is open to interpretation; it did cross my mind that this song could be about depression, hence the conflicting seasonal references ("batten up the hatches, here comes the cold" but it's "summer rain dripping down your face again") and the line "cycle on your bicycle" could tenuously be a reference to bicyclic antidepressants, a type of pain killer after all. In that context, the slightly artificial sound and those odd, twinkling percussion parts that grow increasingly prominent during the track would actually make even more sense.
Or of course it could be about none of this at all, but it's an engaging enough song to make me consider what it's about and it features a typically impassioned vocal from Knights, one of our greatest singers currently working, over their trademark dexterous acoustic guitar figures. Their big poppy crossover hit, but nothing to be ashamed of.