2003 has already been an award-winning year for the Berryman/Buckland/Champion/Martin combo we know as Coldplay... They followed their success at the Brits and the Grammys with the release of the Clocks single in late March 2003. 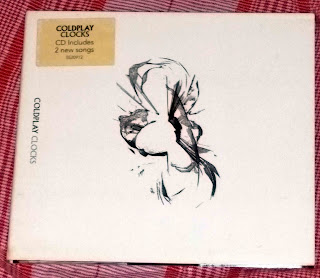 Presumably it was too late in March for
them to predict the chart performance in time for these sleeve notes, but in the event this became their fifth consecutive Top 10 hit in a run of ten (not counting imports). I helped it along myself, during the brief era when I was buying all their singles for the B-sides. By the time of this UK single release 'Clocks' had already been available on the album for more than six months and had been a US Top 30 hit, so it was already on the verge of turning into a cliché.

It might be an unpopular view, then, but I still think that's an undeserved fate for a song that was an obvious standout when I first heard the album. Because of their ubiquity and because they - shock horror - used pianos on their records, Coldplay already had something of an MOR reputation by this point and let's face it, it hasn't always been undeserved. 'Clocks', though, was always a song that seemed really harsh and angular to me, the arpeggiated piano and the guitar pulling in opposite directions while the bass thuds away as if to try and steady the ship. There's an appealing structure too, as the tension ebbs and flows with calmer moments when the piano plays alone and tenser ones when the rhythm section dominates. Even the potential resolution towards the end as Chris Martin sings "Home, home, where I wanted to go" is strangely unsettling, in keeping with the past-tense lyric: did he want to go home and never get there, or did he get home and realise it didn't make him feel better? It's possible that Martin doesn't know either, since the track was apparently recorded relatively fast, which seems to have improved it as the band are not immune to overthinking.

You can;t blame the song for the fact that the same 30 seconds of it was used in every TV trailer for ten years, even if that has contributed to the situation where I own all Coldplay's albums but hardly ever listen to them.