Hi, more self-promotion time as after only a week I've managed to find a listen-again link on Talkradio's Website. Paul Hardcastle and I appear about 12 minutes into the 14:30-15:00 section.


Me and my voice
Link works as of 23rd July 2018, I can't guarantee how long it will stay online.

I also made my debut appearance on legendary pop culture website TV Cream, nominating my favourite tracks from Now 31 to 35. Do not attempt to vote in the poll as it has already closed but your network provider may... oh, hang on.

As I promised the Talkradio listeners, I did buy Now 100 on the day of release. I think it'll be while before I write about that one though.
Posted by Chris Brown at 21:56 1 comments

Metapost: on the radio again

With the impending release of Now 100 I have been asked to pop into TalkRadio in London today (14th July 2018) to discuss the series and some of my favourites. News permitting I'm due to be on around 2:30-2:40 pm.

Time to get the next Now 54 post out of mothballs I reckon.
Posted by Chris Brown at 11:31 2 comments

Divine Inspiration 'The Way (Put Your Hand In My Hand)'


Paul Crawley, Lee Robinson, Dave Levin and Sarah-Jane Scott are the anthemic trance producers Divine Inspiration... Sarah-Jane's uplifting vocals on 'The Way', one of the biggest club tracks of the year which crossed over to the national Top 5 in January 2003.

Another big radio record from 2003, and since it was released in early January, we would have been hearing it at the end of 2002 as well. In fact Paul Crawley commented on that YouTube video that the song was originally written (presumably in its instrumental form) as early as 1999. Funnily enough, the back cover of the single even advertises a forthcoming DJ Sammy single, which would logically have been 'Boys Of Summer'.

So I thought I remembered the song until I tried to recall it just before looking up the YouTube link and then realised I didn't. At least it sounded familiar eventually, though I still think I remember the jokes people made about the title more than the song itself, which is solid but oddly unvarying over the three minutes of the radio edit. I can see why this was appealing to genre fans but not quite enough to win me over. The act folded after a couple of less successful singles.


'The Boys Of Summer' is a classic solo song from the pen of Eagles drummer/vocalist Don Henley... Given the euphoric trance treatment, it was a big No2 success for Mallorcan DJ Sammy in March 2003 as the follow-up to the multi-million selling 'Heaven'.

Well, you can't accuse him of messing with a winning formula. After the huge success of the Bryan Adams cover, he not only covered another AOR song but another one from the very same year, 1985. Coincidentally, this was one of two renditions of the song to chart in the UK that year, with US punk-poppers taking their version to the Top 50.

Interestingly, whilst the Ataris felt the need to update the lyric, replacing the "Deadhead sticker" with a "Black Flag sticker", Sammy and vocalist Loona leave it untouched; even if they knew or cared that it was a reference to the Grateful Dead, they would have guessed that their audience wouldn't. For this version isn't really about expressing the soul-searching and nostalgia of Henley's original, the lyric is there to evoke a song that's already familiar to people. Which, of course, is a means of generating nostalgia itself, but of a less specific kind, and a kind less personal to the record makers. Doubtless in due course people will be feeling nostalgia for this version, either because they heard it first or because it has an association with events in their own life. If you're one of those people and you're reading this because you searched for the song on Google or whatever the popular search engine is by the time you see this, hello.

It doesn't stimulate a lot for me, I must admit. I remember hearing it on the radio a lot in 2003 and not particularly liking it, but then I've never loved the original either. I haven't heard it a lot since but it's a serviceable version if this is what you want.


H.T., Rick and Axel are Scooter - they are from Hamburg in Germany and broke big in the UK last year with 'The Logical Song', 'Nessaja' and 'Posse (I Need You On The Floor)'... On their new single 'Weekend!', due for release in late March 2003, we are urged to "give our respect to the man in the ice-cream van" (!!!)

Scooter had in fact had a their first UK hits as early as 1995, though alas the seminal 'How Much Is The Fish?' wasn't one of them, even though the video seemed to have been filmed here. Still, their career did identifiably go up a gear when they hit on the formula of speeding up the choruses of 70s soft-rock hits and the aforementioned 'Logical Song' became their biggest hit as well as their first Now appearance. Sequels performed well even when based on tracks that hadn't been British hits, presumably because that was irrelevant to the target audience. In this case, the source was a European hit by Dutch group Earth & Fire (not to be confused with Earth Wind & Fire) although only the chipmunk-like vocals recall the original and the remainder is typical of the group's "stadium techno" sound, obviously inspired by the KLF - and thus of course the ice-cream van reference. Scooter are an easy band to be irritated by but it helps to realise they at least know how ridiculous they are.


'Mundian To Bach Ke'apparently translates as 'Beware Of The Boys' - Panjabi MC took Indian instruments, rhythms and voices and combined them with the theme from TV's Knightrider to fuse a unique sound on this single. 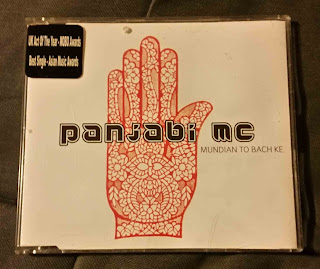 To be slightly more precise, he used a song written and sung by Labh Janjua (who is in the small print of the credits) and some sources suggest that the Knight Rider sample is via the Busta Rhymes hit 'Turn It Up/Fire It Up'. In fact, what I found most remarkable was that when I first heard the record I didn't immediately think of David Hasselhof. Obviously, that's a good thing in itself but it shows this was a good use of a sample, providing familiarity - which doubtless helped this song to cross over to Western markets - and a beat without sounding too obvious.

The track is of recognisably  British origin, not only because Panjabi MC himself is from Coventry but because it has clear roots in the UK-invented Bhangra sound. Despite or because of this it was originally just an album track in 1998, and only really caught on when a German record company picked it up several years later. As the song's popularity spread around Europe it finally made its way to the UK chart in 2003 and even attracted the attention of Jay-Z who added a rap to appeal to the US market. By this time it coincided with a fashion for Asian beats in RnB music though not for the first or last time hopes of a persistent mainstream breakthrough for this style were dashed. Still, it was an enjoyable track and a deserved hit. I bought my own copy the following year in the closing-down sale at my local branch of Virgin, which turned out to be a sign of things to come.

Available on: Panjabi MC The Album
Posted by Chris Brown at 22:00 1 comments

Back when I started this album in November 2015, you might recall that Justin Timberlake and Nelly were right next to each other as tracks 2 and 3 on Disc One, with tracks that were the Top 2 singles for a week in 2002. Here at the exact midpoint of Disc Two, they're even closer together on the same record and in a moderately entertaining coincidence, this entered at 7 in a week when Timberlake had a solo hit at 8. It was a week when we were looking to see whether Eminem would manage the rare-at-the-time feat of two simultaneous Top 10 singles: he didn't but Timberlake managed to sneak in almost unnoticed.

Funny that the subjects of "moderately entertaining" and "almost unnoticed" have cropped up because they pretty much define this track, which at best does exactly what you'd expect. It wasn't their first time together as Nelly also guested on late N-Sync hit 'Girlfriend' and he carved out a big niche for himself as a rapper either unconcerned with being credible or unaware that he wasn't, and thus willing to front pop/dance oriented tracks his peers might consider a sellout. That's probably why his career has never entirely recovered from the emergence of Flo Rida, but that's another story.

Here in 2003 both were doubtless only too happy to add to their hits with this rather by-numbers collaboration, although in the event this didn't do much in the US (it was outcharted there by the unappealingly-titled follow-up 'Pimp Juice'). They probably even enjoyed going to the Playboy Mansion to film the video, and as far as I'm concerned they're welcome to that. Some people were apparently impressed by a remix which plays the vocals over the riff from 'Back In Black' by AC/DC though this was inevitably denied commercial release. And I'm not sure it's even in time but I can't say I blame Jason Nevins for being reluctant to listen to the original track often.

Labels: Justin Timberlake, Nelly, Now 54
Older Posts Home
Subscribe to: Posts (Atom)
An entirely unofficial track-by-track examination of highlights and lowlights from the Now That's What I Call Music compilations. And if that doesn't sound like a challenge, you're obviously not an old curmudgeon like me.